Baldwin Hills is home to Kenneth Hahn State Regional Park. Kenneth Hahn State Recreation area is an excellent place for all ages. Known as one of the biggest inner-city parks in greater Los Angeles, it offers 338-acres of fun. You can find a Japanese Garden, sports fields, hiking trails that lead to a beautiful waterfall and fantastic views of the city. Stop and enjoy a picnic by the lake with your little ones. Spend the day at the Baldwin Hills Scenic Overlook The 8.5-acre park includes an amphitheater, the Evan Frankel Discovery Center, picnic tables, walking paths with a central feature known as the Culver City Stairs. The Overlook's platform offers exceptional views of the Pacific Ocean on a lovely clear day, as well as the infamous Hollywood Sign and downtown Los Angeles. Baldwin Hills Crenshaw Plaza shopping mall is a great place to get some shopping done and a bite to eat if the indoors are more your pace.

Baldwin Hills, also known as Village Green, has been marked as a National Historic Landmark. It is often described as a mid-century modern “garden city.” Homes offered by this beautiful neighborhood are distinguished as hillside houses with sparkling swimming pools and modern condominiums. Homes in the Baldwin Vista community offer slightly smaller homes with more of a secluded atmosphere. Single and two-story homes with up to 5 bedrooms can be found in Baldwin Hills/Baldwin Vista. Extraordinary hillside gems with gourmet kitchens, built-in wine fridge, private balconies and breathtaking views are available. Mid-century homes in these sought-after neighborhoods offer European oak hardwood floors and inviting yards, perfect for your growing families. The Baldwin Hills was even featured on BET network from 2007-2009, Baldwin Hills. It was also the setting for Orson Scott Card’s urban fantasy novel, Magic Street. Children of Baldwin Hills and Baldwin Vista can be enrolled in Baldwin Hills or Hillcrest Drive Elementary School, Audubon Middle School and Susan Miller Dorsey High School. Children can also be enrolled in a few select private charter schools. If you are interested in calling California home in the Baldwin Hills or Baldwin Vista neighborhoods, please give us a call today. 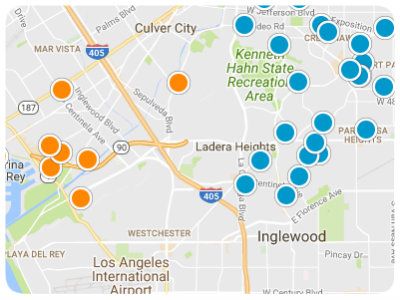 Reviews on Zillow
3810832
"Makeba was excellent. She was very knowledgeable about the homebuying process. She patiently answered all my questions, even though many were ... more "

5.0/5.0
by mel4godtoo
3809144
"Professionalism from the beginning to the very end. Makeba was on point with the listing price and her open house brought in lots of prospects, which ... more "

5.0/5.0
by Jemelia Bowie
3093338
"I would gladly refer Makeba. She was very professional in the handling the sale of our property. I was very impressed with the level of respect the ... more "